A phenomenal concert from April Verch and her band who rocked the Greystones with some world class music and dance!

Canadian fiddler, singer, and stepdancer April Verch has been performing for more than two decades and with her band, recently released her 10th album The Newpart. April is a phenomenal fiddle player and was winning contests in her native Ontario from an early age. The April Verch Band’s mix of bluegrass and folk, featuring guitar, banjo, mandolin and bass as well as fiddle, is highly entertaining and the talented players deliver a tight set of songs and tunes drawing on the many fiddle traditions of Europe and North America. April’s incredible stepdancing talents are the icing on the cake!

This trio features excellent musicians at the top of their game, with some gorgeous guitar and banjo picking as well as the superb fiddle playing. Harmony singing and spectacular step dancing complete the picture.

A wonderful intimate night of music at The Harland, thanks to all who came out!

Dana and Susan Robinson are a husband and wife duo hailing from Vermont, USA who specialise in a mellow mix of traditional Appalachian old time music and contemporary acoustic. With fiddle, clawhammer banjo, guitar and mandolin all featuring, the couple’s versatile musicality is complemented by

some lovely vocal harmonies. Underpinning many of the songs is the undeniable rhythm of their trademark guitar/banjo sound. A talented songwriter and multi-instrumentalist, Dana provides most of the duo’s lead vocals and also enjoys telling stories and anecdotes as part of the Robinsons’ performances. Sue grew up in a musical family in New England, studying piano, oboe, and Scottish fiddle before meeting Dana in 2002 at a house concert. Her subtle and delicate clawhammer banjo lines give great character to the duo’s music and she lends her rich mellow voice to both harmony and lead vocals.

Advance tickets £10, available at the café or online at Wegottickets (10% booking fee applies). £12 on the door.

Thanks to all who came to Hepworth on Friday for a magical evening with Rayna & Jeff!

Rayna Gellert is an undisputed queen of the old time fiddle. True North Music is excited and delighted to announce that Rayna will be playing a concert for us in the Holmfirth area as part of her UK tour this May/June. Also a talented singer and songwriter, she grew

up in a musical family and has spent most of her life immersed in the sounds of rural string band music, heartfelt gospel songs, and old ballads. Based in North Carolina, Rayna is steeped in the culture of the region. She is also a popular and experienced fiddle tutor, having taught at many camps and courses across the USA and Europe.
Rayna’s musical palette is broad and versatile and she has recorded with musicians in various genres, including Robyn Hitchcock, Sara Watkins, Loudon Wainwright III, John Paul Jones, and Abigail Washburn. From 2003 – 2008, Rayna was a member of acclaimed string band Uncle Earl and in recent years has been recording and touring as a solo artist. Rayna will be joined on her UK tour by the talented multi-instrumentalist Jeff Keith.

Thanks to everyone who supported the first True North Music event in Huddersfield, a wonderful concert from Grant, Ben and Joe

With virtuosic guitar and mandolin picking complemented by hot double bass and occasional saxophone, the talented Gordy, Somers & Walsh will delight you with their eclectic repertoire, ranging from traditional bluegrass to modern jazz. Ben met Grant and Joe at a festival several years ago and the three friends quickly discovered they had a special musical connection. They

played a number of American gigs together when Somers travelled over to the USA in 2014, and this spring sees Gordy and Walsh make the return journey to continue the collaboration. Gordy/Somers/Walsh will play just a handful of UK dates as well as concerts in France, Germany and the Netherlands. True North Music is delighted to be hosting the trio in the Syngenta Cellar at the Lawrence Batley Theatre in Huddersfield.

Thanks to all who joined us for True North Music’s first event at the Harland Cafe – a sold out concert and a fab night all round!

Join us at the Harland Café in Sheffield on Good Friday (3rd April 2015) for bluegrass all the way from Montana and Idaho. The

Growling Old Men (Ben Winship & John Lowell) will be joined by UK double bass ace Ben Somers, bringing us authentic songs of the American West with gorgeous bluegrass picking and sweet vocal harmonies. They will also be hosting an early evening workshop (4-6pm). Ben Winship (mandolin & vocals) and John Lowell (guitar & vocals) are both veterans of the Northern Rockies’ acoustic music scene in the western US and have been performing and recording together since 1998. They present a

set of songs, ballads and tunes informed equally by the music of the Appalachian hills and the western plains. They occasionally collaborate with other top bluegrass players, including Londoner Ben Somers, an experienced musician and fine singer who joins them on double bass & vocals for this handful of UK dates.

“These masters of the guitar, mandolin, and harmony vocals…speak to each other through their instruments with a smoothness, fluidity, and familiarity that magically occurs when musicians come to know each other so well they can read each other’s mind.” ~Dan Miller, Flatpicking Guitar Magazine

The whole event takes place in the intimate surroundings of the Harland Café, and is set to be a wonderful evening of live music! Book now to secure your place, especially for the workshop, which will be kept to a small number to ensure attendees get the most out of the session. As well as a licensed bar, our hosts at the Harland Café offer a varied and reasonably priced menu.

Read an excellent review of this sold-out concert here.

True North Music is delighted to present Cahalen Morrison & Eli West on their first visit to Sheffield, on Saturday 24th January. This Seattle-based duo has been showered with praise on both sides of the Atlantic following their first 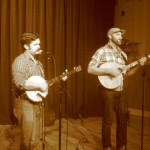 recorded collaboration on 2010’s The Holy Coming of the Storm. Since then they’ve recorded two more albums and toured extensively, including regular visits to the UK where they have appeared at Celtic Connections and recorded a session with Bob Harris. They’re among the finest exponents of rootsy acoustic music working today, steeped in the traditions of bluegrass and old time but with a modern twist.

Their latest offering, I’ll Swing My Hammer with Both My Hands was produced by legendary roots artist Tim O’Brien, who says “Cahalen and Eli are making music that the world needs!” Morrison and West have been refining their gorgeous blend of original songs and old-time tunes for several years now, with exquisite harmony singing and top class instrumental picking (on mandolin, guitar, clawhammer banjo and bouzouki) front and centre.

Find out more about the lads and their music at cahalenandeli.com